Today I’m excited to bring you a Guest Post and Kindle Fire Giveaway from Chris Datta. His first Novel Touched with Fire was a number one best-seller in the Historical Fiction category, and this supernatural thriller lives up to the high expectations readers have for this talented author.

The Demon Stone by Christoper Datta 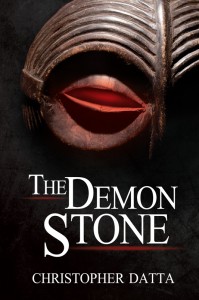 The Demon Stone is a powerful supernatural thriller that leads you from the killing fields of Africa to the quiet Boundary Waters of Northern Minnesota. In braided narratives, Datta spins a terrifying story about the spiritual forces—both real and supernatural—that incite the basest, bloodiest and most frightening of human behaviors.
“Reading Chris Datta is like riding a rollercoaster. It’s a fast ride filled with twists and turns. His Demon Stone is scary fun. Stephen King, watch your back!”
-Richard Rashke, author of The Killing of Karen Silkwood

Review of The Demon Stone

When faced with a choice between life and death or right and wrong, most people will choose life and what is right, but what if they are faced with the choice of doing what is right and dying or doing something wrong and living? This is a test of character, of the true nature of a person. When Kevin goes to Africa to visit his best friend, Bill, he is forced to make just such a choice, and the consequences of that choice haunt him when he returns home to his wife and daughter.

The Demon Stone is a real page turner of a story filled with suspense and real world horror. The supernatural elements of the story are almost an afterthought and don’t  really make an appearance until the second half of the book. The characters are well done and dynamic. The switches in time and setting were a great way to build up the suspense and explain exactly what happened to Kevin and his family.

There is not much to complain about with this novel. If anything I would have liked to see it be a little longer so the tension in the second half could be ratcheted up even higher, but this is a minor consideration.

I really enjoyed this book and  if you are a fan of suspense and the supernatural I think you will enjoy this book as well. The story is rooted in a world all too real and will leave you questioning how much of the story is real and how much is fantasy. I recommend picking this one up as soon as you can.

Debut author CHRISTOPHER DATTA is no stranger to civil conflict or the still-extant scourge of slavery. Most recently the acting ambassador to the Republic of South Sudan where he helped end a war in April of 2012, he has spent a distinguished career moving from one strife-torn country to another, including Lebanon, Rwanda, Sierra Leone, and Liberia. A lifelong student of the American Civil War, his research for Touched with Fire is exacting and based in part on a true story.