Pulling his hands away, Aldric looked at them and sneered at the blood that still covered them. He was no Lady MacBeth, railing against the guilt that plagued him, but he was a murderer. As the head of the largest lunar corporation he was responsible for the death of thousands, but there were usually hundreds of people between him and whatever unfortunate soul got in his way. The interview room was clean, the video erased and the bodies disposed of before he made it to his office. He would not face any semblance of justice for the murders, at least none the authorities could mete out. He killed his guards without hesitation or concern for the consequences, and that is what worried him. 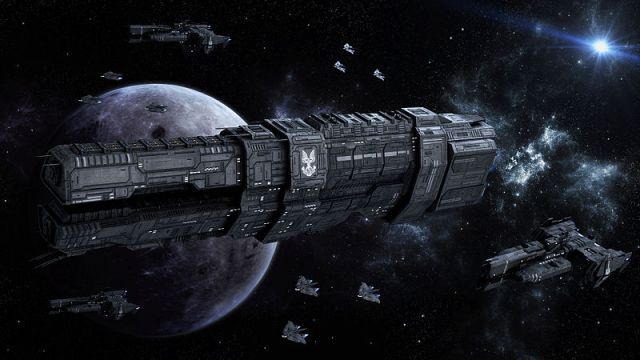 Lately I’ve been spending a lot of time cruising through Tumblr. I’m not going to get into the weirdness that Tumblr is or how the place leaves me feeling conflicted over political and social issues, but I will say that I’ve been enjoying a number of science fiction and fantasy pictures that have left me feeling a little inspired. At least I’m going to call it inspiration, because to say they left me feeling desirous sounds a little creepy and somewhat inappropriate for this blog.

Epic shots of mammoth space ships have left me wanting to write science fiction in a bad way. But it would not be enough to write science fiction by itself, no, there must be an epic space battle included or my desire to write epic science fiction will be left unresolved. I’m sure my repeated watching of the new Star Wars trailer has influenced this urge in me, but I have always loved the idea of capital ships slugging it out in the void of space.  I can only think of a handful of books that I have read where such battles are described, and there are some movies out there, but all so often the space battle is given short shrift as the action focuses on the characters involved.

As much as I want to write that perfect scene of mammoth starships striking each other with blinding streams of solid light and missiles designed to lay way to planets while hordes of starfighters zip between the ships like clouds of violence made manifest, now is not the time.  Alas, I have some urban fantasy to finish and I know that straying too far from the series I am working on will only drive me crazy.  I know it sounds a little weird for a guy who routinely juggles too many writing projects all at once, but I’ve started to get a little OCD with my writing. I tried to do something else for NaNoWriMo, but I couldn’t make myself focus on another story no matter how much I wanted to.

In the meantime, I’ll have to settle for talking about epic space combat. So tell me, what are your favorite books and movies for scenes of ship to ship combat? What made them special in your mind?

So for the last week I have been running a Kickstarter Campaign to prepare for the launch of my new book, Apocalypse in the Balance. I haven’t brought it here until now because quite frankly I didn’t see this as being the best place to promote the Kickstarter since I have been slacking on this site as of late. Granted, the slacking has been to the focus on finishing the editing on the very book I am trying to get paid for, but still, not much activity means not a lot of readers coming through.

So, with all of that behind me, let me tell you that I have this great campaign and I have already hit my stated goal of $350. I would like to pass that number up a bit more than I already have because every additional dollar either goes towards increasing the size of my print run or toward marketing dollars. I had zero budget for marketing on my first book other than this website and one blog campaign. I would like to do a little more with it this time and see if I can’t get some decent exposure.

If you back the project you will be rewarded with copies of either the new or old book depending on how much you pledge. Click the link below and take a look.  You won’t regret becoming a backer to this project, and you’ll get to be one of the first people to read the sequel to Apocalypse Rising.

APOCALYPSE IN THE BALANCE KICKSTARTER

It is that time of year again. It is NaNoWriMo time, and I am going to give it a shot this year despite my rather full plate.  I know, you’re saying, “But Eric, you still have to edit AR2 and get it out for your adoring fans to read,” and you would be absolutely right, but I need to push myself in November because I feel like I have let myself get lazy with my writing habits this year and I need a good kick in the shorts to get me revved up again.

My original idea for this year was going to be my intended story for last year, but I cannot find my notes, so I need to scurry an outline together in a hurry if I want to go with that SUPER secret concept. If I can’t put that together then I will just do the sequel to my NaNoWriMo from two years ago. I have a lot of it ready to go already, so it would be an easy substitute.  Of course, if I have to go that route, it sure makes it look like NaNoWriMo will be a struggle since I can’t even find the time to redo my outline and character notes.

I am growing a small group for mutual encouragement, so if you want to join us, just stop by my NaNoWriMo page HERE and add me as a buddy.